News Trading on NADEX with Binaries

Binaries might be a good way to profit from news on NADEX too.  My initial thought was to stick with spreads.  But, the binaries may have some merit as well.

I've been following the upcoming news releases using the forex calendar on forexfactory.com and forexpeacearmy.com.  Looking at news to be released for this evening, I saw a high impact news release out of Australia.  There was also a medium-impact release out of Japan.  My strategy on news trading depends (or so I thought) on high-impact news.  But, I did watch what happened when that medium-impact Japan news (retail sales, year-over-year) came out and I got inspired by this chart: 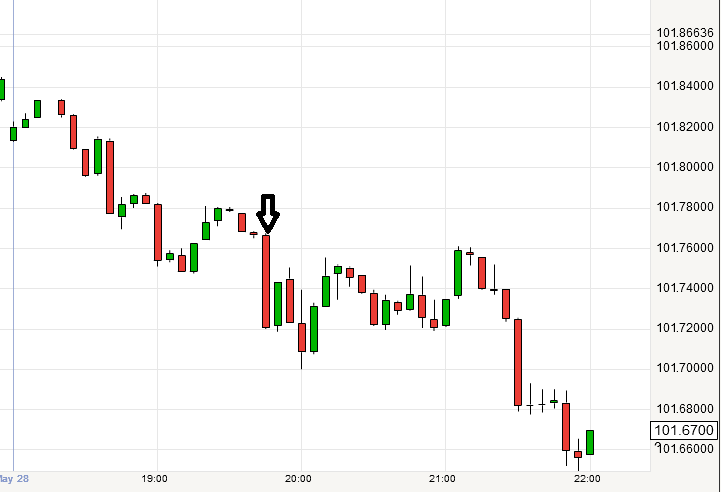 That news out of Japan came out at 10mins to the hour.  At 15 mins to the hour, there was a contract below the current level of USD/JPY that could have been shorted around $90.  I don't remember too well how much the out-of-the-money contract could be bought for, but, I believe it was in the $10/$15 range.  That's because of the very short time remaining. Yet, for either of the contracts to finish in-the-money a small move of just a few pips was needed.  Ordinarily that few pips would be very unlikely given the short time remaining.  But, we had a news event coming.  As indicated on the chart, USD/JPY did move and that $90 contract went to $0.  That was a nice reminder to watch out for medium-impact news that comes out with 15 minutes or less to go.

Inspired by that, I did some research on the AUD/USD news.  The report (Private Expenditure) has caused big moves in the past.  So, I decided to try the binary approach on it.  I guess a spread could have worked too, but, I wanted to give the binaries a try with this method.  I took both sides as shown here:

Anyway, it looks like you can make money on both spreads and binaries when you trade news.

I am going to keep monitoring the news events.  I really don't want to get into any trades unless the particular report has a good history of causing bigger moves.  The forex calendar on forexpeacearmy.com is really handy for doing research.

One other thing, I chose to trade USD/JPY based on how much the contracts were trading at.  A more direct trade on Australian data is obviously AUD/USD however, looking at the history of the report's effects on various currencies, I saw that USD/JPY  was a viable option as well.  In the end, AUD/USD may have been a better trade particularly had I been interested in spreads since I think it moved about 25 pips or so.

Binaries are decent on news and are a great substitute when no acceptable spreads exist. The issue is premium is also built into them to reflect expected movements. Unlike spreads they are not variable payout at expiration. Obviously it is prudent to close any contract previous to expiration. This can work for or equally against you. For example if you do not hit your profit target the binary can easily lose all value. Whereas a spread is much more likely to retain some if not all its value and even profit. However, a caveat to this due to binaries all or nothing nature they will often be "cheaper" than spread straddles.

The correlated strategy that will work much more consistently, due to the reasons stated, is a spread straddle. Buying a spread above the market and selling a spread below the market where the floor of the bought upper spread and the ceiling of the sold lower spread are the same.

The HSBC Flash Manufacturing PMI report comes out at 9:45pm Eastern June 30.  The forex calendars show this as having a high impact on the currency used in China.  However, it does seem to cause some movement in USDJPY.  With just 15 mins to expiry on the 10PM USD/JPY contracts, this report could present the opportunity to make a quick profit if there is a relatively modest movement in USD/JPY.  A strategy to buy an out of the money strike and sell an in the money strike using a binary is the way to go to trade this.

Last time this report was released, USD/JPY moved about 12 pips in the following 15 minutes: 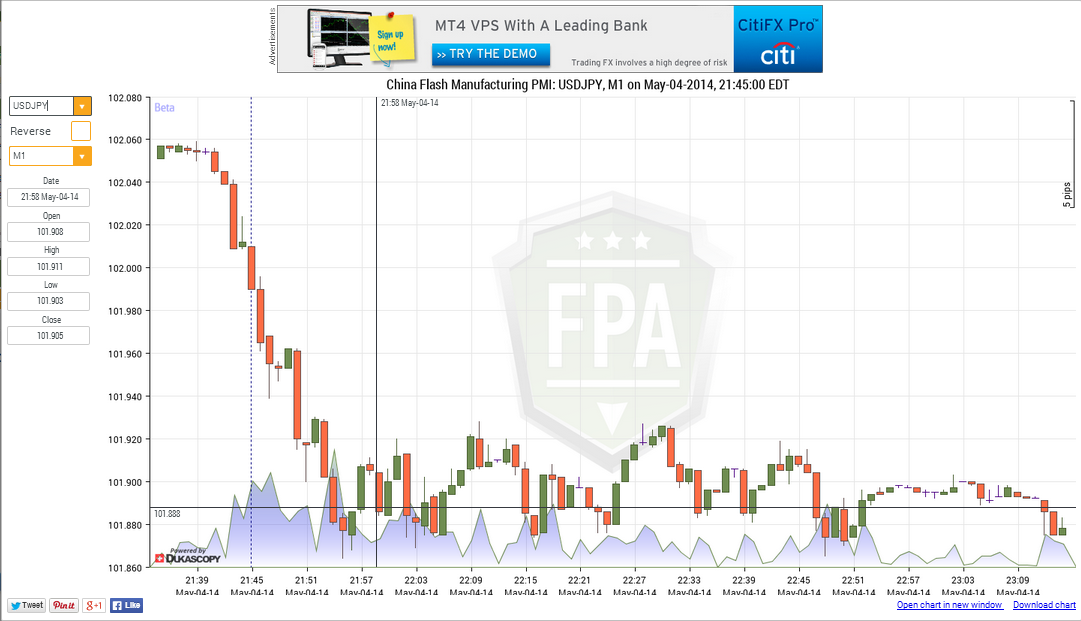 In April, it only moved about 5 pips: 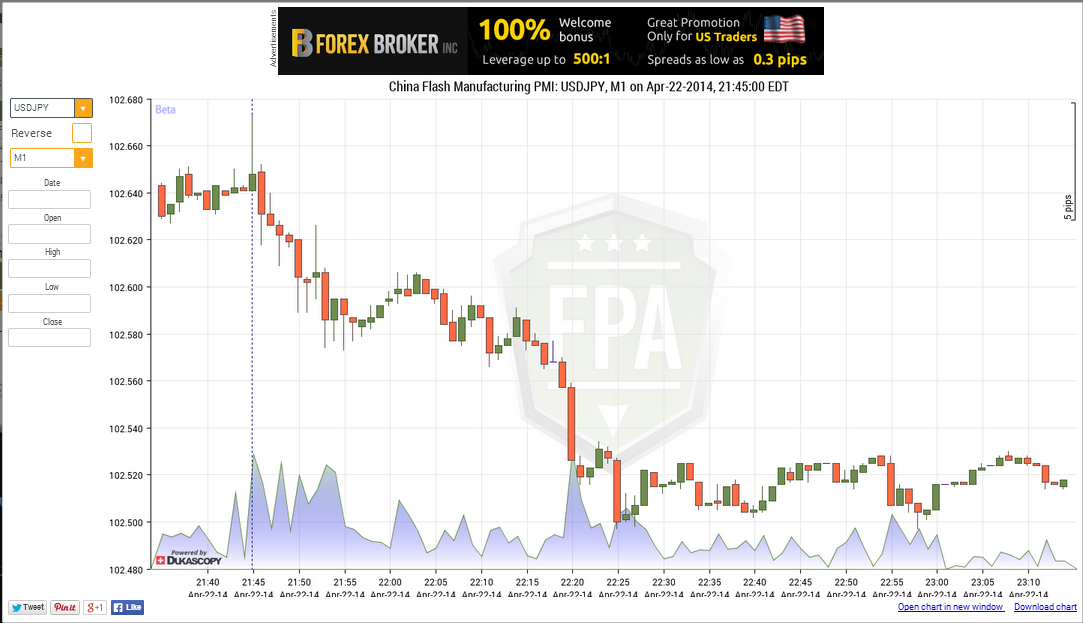 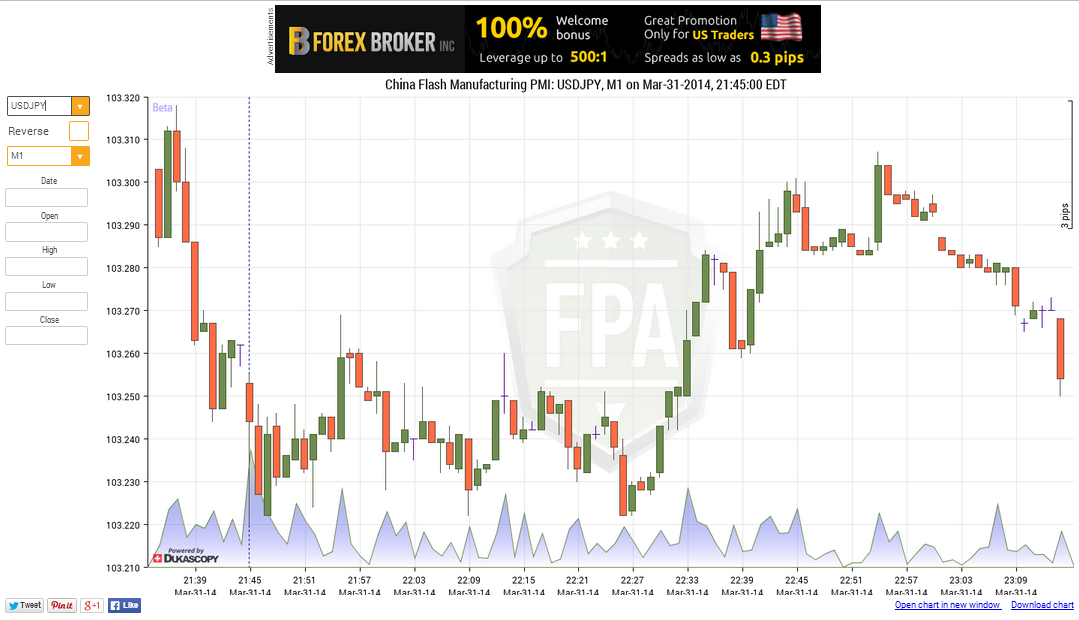 And before that, about 12 pips: 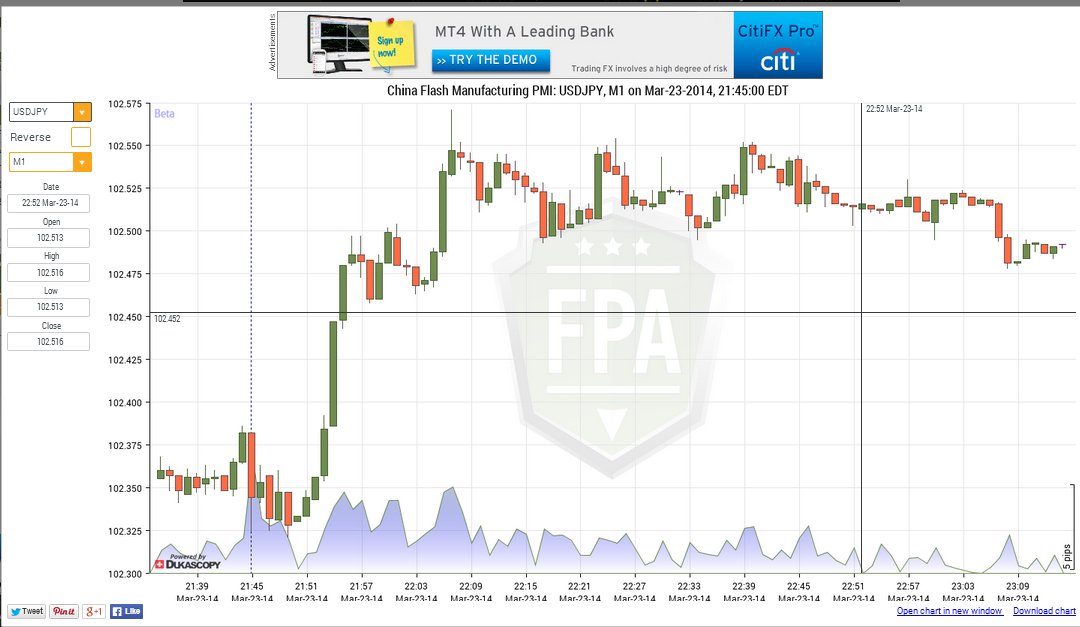 So, clearly a move of just a few pips is probably a total loss.  However, movement of 5 pips or more is much more likely to yield a net profit.  This seems likely a relatively low-risk scenario.  I'm going to give it a try.

Very nice observation. PLEASE do share your results with us.

This trade was not successful.  Here's the details:

There was a net loss of $284.  The price action was interesting.  USD/JPY fell down to about the .41 level and sat there for several minutes.  That resulted in the .44 strike dropping down to about $6.  As shown, I was in the .39 level and the .49 level.  It had to go above .49 or below .39 in order for me to make money.  USD/JPY perked up a little toward the end so I decided to buy the .44 level (only 2 contracts though).  And it turned out that that was the winning trade.  The gain from the profit on the .44 contracts wasn't enough though to compensate for the total risk of the other two trades.

The current account report due out at 19:50 Eastern tonight has moved EUR/JPY 10 pips or more. within the next 1 hour and 10 minutes.  A straddle on EUR/JPY seems like a reasonable play.  Here's what happened on the last data release: 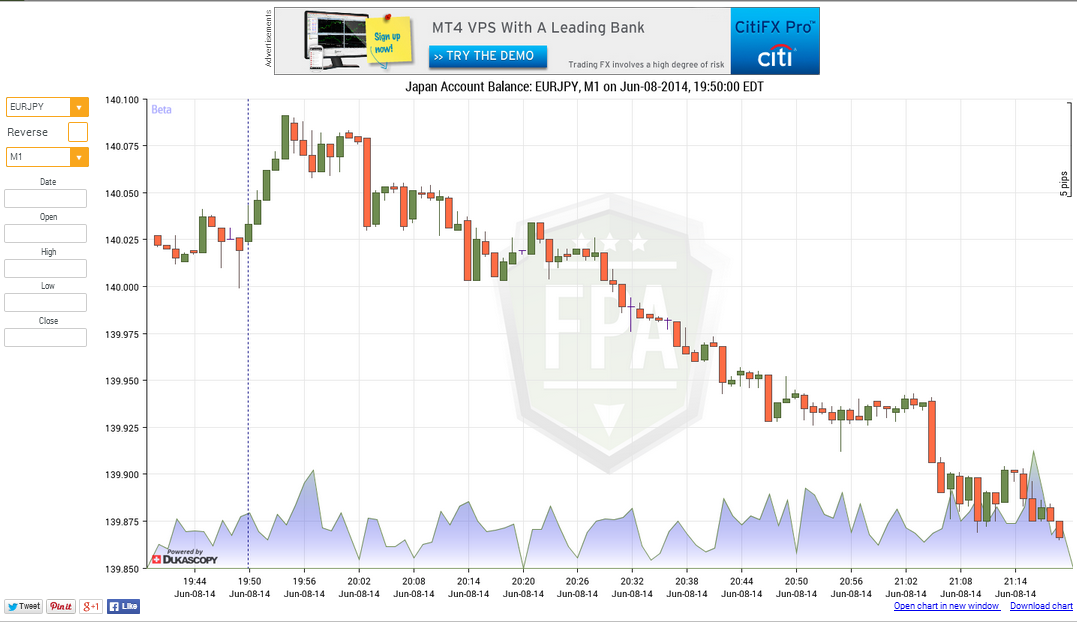 This trade was successful.

Tomorrow, at 8:30am Eastern, the Canadian Core CPI report will be released. It looks like a decent market mover suitable for trading on either a 10am intraday binary or an 11am daily binary.  I plan to trade one of those two on USD/CAD.

On a general note, I recommend doing research on the history of how the market has moved within specific time frames before and after the data release event and trading only the ones that tend to move the market more.  It seems that in news trading less is more.  Rather than trying to trade every supposedly high-impact event, we need to trade only the ones that tend to produce good market movement.  After all, that is the whole basis of this type of trade where you sell a lower strike and buy a higher one.  We are intentionally creating a "donut" hole in the middle of the two strikes in which we will lose everything if the market doesn't move enough.  If we don't want to shoot ourselves in the foot, we need to make sure we have a high probability trade.

What charts or resources do you use to see how how much the market will move from past history? I use Forexfactory and Forexpeacearmy for the news, and I know I can view reports from them, but is there something better?

What charts or resources do you use to see how how much the market will move from past history? I use Forexfactory and Forexpeacearmy for the news, and I know I can view reports from them, but is there something better?

I use those two but I also have historical NADEX settlement data which shows the value of the various currencies according to NADEX at the time the contracts traded there expired.  That makes it easy to see the market movement without looking at a chart.  For Canadian data, I tend to compare 7am settlement prices to 10am and 11am prices as reported by NADEX because there is no USD/CAD binary contracts expiring at 8am or 9am on NADEX.  Really, though, in the absence of having historical data, I think using the charts on forexpeacearmy are sufficient because you can zoom in on the event in question and select the timeframe of the chart.

Thank you for the information I really appreciate it. I've written Nadex and I'm supposed to to have access to their historical data sometime next week if they approve it. Being able to see expiry's from the past I feel will be very beneficial . How did you do with your USD/CAD trade?

I didn't like the price of the contracts in the 20 minutes or so before the data release.  Then with about a minute to release time, the contract prices looked good, but by that time I didn't think I could enter the positions fast enough to ensure that I would get in on both sides.  So, I accepted defeat on the "straddle" idea.  However, once USD/CAD started dropping I decided that if history repeated itself, 20 pips was a good guess as to how many pips USD/CAD would lose by expiry time.  Since it was trading right at 1.0760 right before the release, I decided 1.0740 was a good level to short.  I actually thought it was going to lose much more so I took a short position after the release at that level.  I shorted at $21 which seemed like a good idea at the time for the 11AM expiry.  Had I known that USD/CAD would come back to test that level, I would have held off and shorted it around $45 or so.  Here is the short I took:

Net profit on that trade was $114.  As it turned out, the 1.0740 level was a reliable place to short USD/CAD during the whole trading session and I was able to capitalize on that with other short trades as well.

Very nice trade, Kind of chaotic with that market, but you made some good decisions that resulted in profit.

Tomorrow at 9:30pm Eastern, the quarterly Australian CPI data release will occur.  This looks like a good market mover.  I'm going to give it a try.

I took the EUR/USD 11:00am expiry this morning. Won my straddle. I'll be trading the 9:30pm as well, Looks like a good mover for sure. Good luck!

*Edit prices are high and climbing, I should have put my positions in last night for this trade, if the prices drop I'll get in but right now they are to high to enter.

This trade was successful.

What a perfect trade!

"The game taught me the game. And it didn’t spare me rod while teaching."
- Jesse Livermore

Back to Nadex Strategies


0 user(s) are reading this topic