108 replies to this topic

no red and blue

Did you back tested your strategy or used it in live trading? I tried using Renko Maker  live before and it repaints.

Somebody test this on a demo plox, checking a back test is usually never right

Can you check this screenshot of the EURUSD? You show results of 29 wins and 0 losses for Friday June 26th so naturally I thought I would take a look. There are certainly a lot of winning trades there, but I want to be sure I understand your entry requirements because you will see there are two trades where there are red arrows and CCI and ADX are both red, but they would have finished OTM.

If you take the trade at the start of the next candle after the arrow, both these trades would lose on a 5 min expiry. Please don't get me wrong I can see that there are winning trades throughout the day, but surely these 2 are losers? I'm just trying to make sure I understand your strategy fully. Thanks. 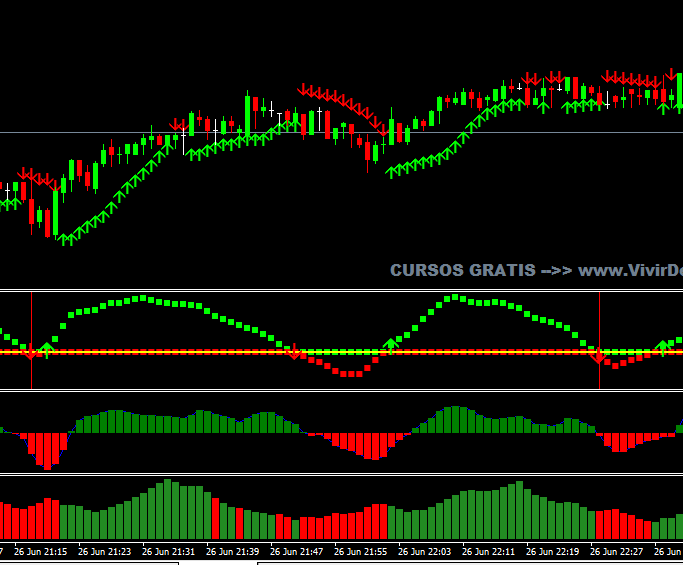 Sometimes Renko Maker repaint (arrow). So I use Advanced ADX and FXSpiper's T3CCI to filter it. We must adhere to strict rules for trading:

Thanks for that but just to be clear:

ADX = FXST3. Do you mean they both must be the same colour? i.e. Both red to take a Put?

Can you just explain why this is not a valid trade? Thanks.

You have to understand the transaction against the trading rules of my system.

Please check it against.

Thanks Cuong - that makes sense.

Hi, thank you for your strategy, Wich session are you used?, London, New york?

Thanks Cuong85, for this strategy. I believe it needs to be tested life before the accuracy can be confirmed. It is possible to have several consecutive Reloj indi in a row, while the first one already met all the conditions. On back test the repainting Reloj will not show on the screen.

at least the renko indicator repaints, so from historical charts you wont get real data. I experimented with it - dont think it works out.

Sorry friends. I will do no further coding.

Cuong, thanks for this strategy.

Can you explain how can we use Candle_Direction indicator?

Cuong, thanks for this Strategy.

can anybody help put more light on the repanting part?

how do we deal with this part?

thanks to anyone who care's to help

Please can try as much as possible to explain more clearly what the rules are? I can see any blue arrow on my chart and moreover your templete seems not to contain all the indis.

I already use this strategy for some time.
It works best in london market.
Never go into a large candle.
I used to expiration 2min. I made use only of Renko indicator.
I will test your method with ADX and FXT3.
My gains were 60% and 70%.
Happiness!

I have this running on a demo. To be honest it looks interesting so far. I've had it running since 8am UK time when the first trade came in OTM right at the end of the 5 mins, but trades at 8:39 and 9:24 were ITM. I'll feed back when we have some more results.

I haven't seen any problematic re-painting yet. I think the idea is to take the trade after the close of the bar on which the arrow appears, so once the bar is closed the arrow stays where it is confirming the signal? So a green arrow appearing when the ADX and CCI bars are both red is a buy with 5 min expiry. So far, so good.

ForexTrader3 I think it's only fair to Cuong to point out that although you may have traded a similar strategy with 60% - 70% success, you also said you haven't tried it with ADX/CCI, and also you were using a different expiry, and these are all important elements to this strategy, so the results you gained without these indis/expiries are likely to be quite different to those made by the full strategy over the same period. It would be very useful for us if you could test again with the full template and let us have your opinion.

Back to 5 Minute Strategies


0 user(s) are reading this topic